Buy all six Ranger in Danger Books now for only $50! 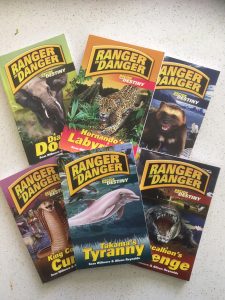 A choose-your-own adventure style book series based on real-life stories from rangers around the world. Defeat poachers, rescue animals and have fun learning about wild animals and the natural world.

Two classic picture books now only $19.95 for both! 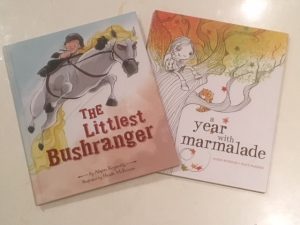 The Littlest Bushranger is an epic, swashbuckling story about Jack, who is left at home with his faithful dog Hector when his sister Lil starts going to school. But their ordinary day is about to be transformed when a fiendish, oddly bird-shaped outlaw suddenly descends on them. Booktopia

A Year with Marmalade is a charming book about about losing friends and making new ones. Set against a beautiful backdrop of the turning seasons, this story of transition reminds us that change, while constant, is not always a bad thing. 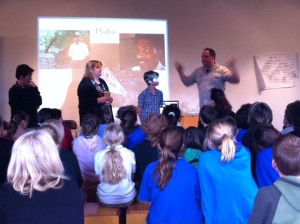 Sean and I had a fantastic time presenting Ranger in Danger at the Melbourne Writers Festival, but it ended up being hilarious.

Sean was going to burst into venue after all kids settled and I was to say to the kids that Sean said he would be there and I didn’t know where he was, and the last I heard was that he was seeing some elephants.

So, off Sean runs to Yarra bank to find mud to rub on his face. (he is much braver than me. Those of you that know the Yarra River in Melbourne would know why I would be very hesitant to rub mud in from there!)
The children arrive and I introduce myself, and look at watch etc and say Sean should be here soon.

But we hear an elephant trumpeting faintly somewhere in the distance.

I ask kids what facts they know about elephants. They know lots, and I even learn quite a few new ones. Every so often we hear a soft elephant trumpet.

I ask everyone to yell ‘Sean’ again.

Then suddenly he rushed into room with a great bang and asked for a strong volunteer to help him hold door shut against the elephant. He had got a passerby to bang around outside.

And then we went into the dvd of when Sean was really chased by an angry elephant.

So Sean and I really need to work on our cues! He was waiting for one of the volunteers to summon him in, but don’t think anyone was sure who was meant to do it.

The rest of the talk was fun. Lots of lovely bright kids.

A huge thank you to the Melbourne Writers Festival!

‎Sean Willmore and I are looking fowarding to bringing Ranger in Danger to the MWF on the 31st of AugustArtPlay12:30pm – 01:15pmHope we see some of you there.

For tickets and more in information here

Sean and I were delighted to be interviewed in KIDZONE!

The questions really made me think about what the ranger in danger series is really about.

Thanks, Drew Taylor, for being such a great interviewer! 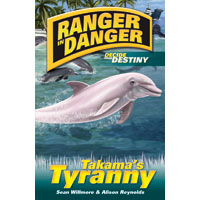 You’re off to the Pacific islands. You can’t wait.

Gigantic whales, man-eating sharks and mysterious shipwrecks.
Someone’s after the supersmart dolphin, Flip, with its huge dorsal fin.
It’s up to you to save it from captivity and the evil clutches of Takama.
Do you dare to try?

I was really pleased to get more good reviews. Ranger in Danger was part of the  Green Books Campaign 2010!

Launched in 2009 by Eco-Libris, this campaign aims to promote “green” books by reviewing 200 books printed on recycled paper or FSC-certified paper. Our goal is to use the power of the internet and social media to promote “green” book…s and increase the awareness of both readers and publishers to the way books can be printed printed in an eco-friendly manner. On November 10, 2010 200 bloggers took a stand to support “green books”. www.ecolibris.net

Five of the Ranger in Danger books were selected.

This blog is full of book reviews and great suggestions to read.

4 the LOVE of BOOKS

A US blogger who supports green books, which has to be a good thing  🙂

Jennifer Howard is a Washington based writer. Lots of interesting bookish insights on her blog.

This is a fun review. Possible ranger in danger activities are included!

The Ranger in Danger series had a launch at the Taronga Zoo.
It was fantastic.
We met a great group of super bright, talented school children from Middle Harbour,
who all knew an amazing amount about animals.
We had a close encounter with an iguana and a python.Check out how long the python is. Sean fancies one for a necklace.
A special treat for me was to meet a couple of the Dhimmuru rangers from Arnhem Land in
the Northern Territory. Ranger in Danger: Rapscallion’s Revenge is set there and the Dhimmuru
rangers feature in it. I was sad when they told me that I wouldn’t be able to learn the yadaki
or didge if I visit as only males can play it. But I can have beating sticks, which isn’t quite
the same, but probably much easier.
A huge thanks to everyone involved, especially the Taronga Foundation and the Taronga zoo.
After the launch I wandered around the zoo with my friend Fiona, and we had a fabulous time.
She liked the rabbits that lived in mini castles and I think her rabbit Rex is going to have a new
fancy hutch. I liked the gorillas chilling in hammocks. When we got tired we caught a gondola
that sped over the top of the zoo and we had a great view of the elephants, including a cute little one.
If you get the chance, go to the Taronga Zoo. 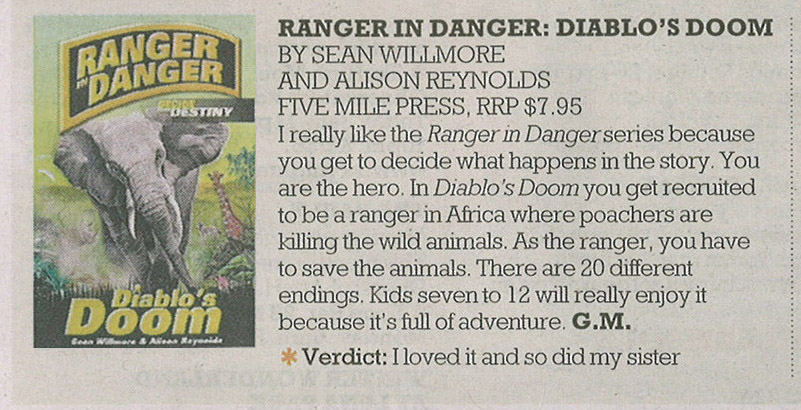 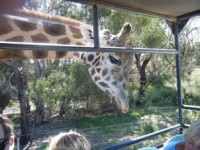 The zoo launch  at Werribee free-range zoo was super fun! We had a beautiful day, and had the actual launch in a sort of huge hut, which looked over paddocks of free roaming rhinos, zebras and giraffes.

I’ve never had the opportunity before to be so close to wild animals. I had a very close encounter with a giraffe, but Ranger Sean, my co-author, had an even closer encounter. The giraffe seemed to like the taste of his hair!

The rhinos were huge and apparently very intelligent. You would definitely want to keep on their good side!

Whenever you get the chance to visit a zoo, take it!